We are thrilled to be bringing you the release of FIVE REASONS TO GO by Candace Knoebel. FIVE REASONS TO GO is the second standalone in the Risky Hearts duet. If you love your contemporary romance emotional and angsty then grab your copy today!

I honestly despised Jack in Ten Reasons to Stay but I know there are always two sides to every story and after knowing her side it only seemed right to give Jack his say too.

I wish I could say my eyes were opened and I understood why Jack wanted the things he wanted but I all I could feel was selfishness and maybe this was the intention. I struggled to relate to his conundrum and reasoning for wanting an open marriage and I couldn’t get my emotions on board with him.

My fight continued trying to bond with Jessica and her reasons for living the way she was. Overall even though I read until the end these characters failed to make me fall in love with them. The writing is good and the story well put together and I loved watching Jack grow and become something a little better but I didn’t learn to love him like I thought I would. However just because Jack couldn’t warm the ice of my heart doesn’t mean he won’t warm yours.

If you fell into the story with the first book you definitely need to take this journey too. 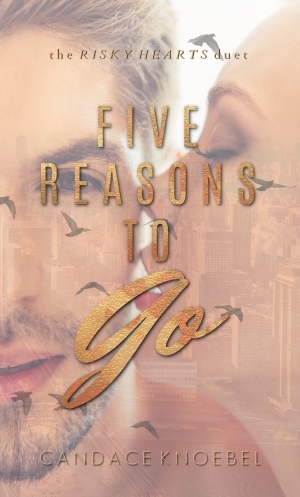 One day a week. That was his rule. And it was also our downfall.

My marriage to Hank was one of convenience. When I got pregnant at sixteen, he took me in and kept a roof over my naïve head. We had an agreement—we could sleep with whomever we wanted so long as our children were kept in the dark. It worked great… until it didn’t.

Cocky Jack Swanson was never supposed to be mine. His marriage was open, but his heart was guarded… until he slowly let me in, revealing an alluring man with a painful past. With him, I felt what love could be. I felt wanted… needed. I’d never wanted to fall in love… but then I did.

And now… the rules have changed.

Jack isn’t the same man I fell for. Broken and gutted from his divorce, he’s a shell of who he once was. Sullen and worn down. I know I can bring the good in him back out, if only he’ll let me in. If only he’ll just stay, instead of giving me all his reasons to go.

Add FIVE REASONS TO GO to your Goodreads TBR!

Don’t miss the first book in the Risky Hearts duet!

Candace Knoebel is a hopeless romantic with an affinity for whiskey and good music. Her love of words began when she met the boy who lived in the cupboard under the stairs. She’s a self-proclaimed Lost Girl. Words are her mirror.

With two completed series, her work ranges from paranormal to contemporary, all centered heavily around romance. Currently she lives in Florida with her husband and two children, and has just completed her fifteenth novel, Ten Reasons to Stay.