A new hilarious true-Tara adventure is at your fingertips right now and it’s the perfect way to spend your weekend! GAH! I love this book! 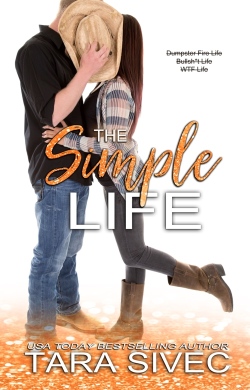 Brooklyn Manning thought her life was perfect in every way, until it crumbled down around her and turned into a dumpster fire. With her pride wounded and her tail tucked between her legs, she leaves New York and goes back to her tiny hometown of White Timber, Montana.

No more twenty-four-hour taco trucks, no more shopping at the best designer stores within walking distance, no more giving taxi drivers the finger when they angrily honk at her. She didn’t think it could get any worse. But then Clint Hastings walked into the room and insulted her.

Only this time, getting under each other’s skin is a hell of a lot more fun than it used to be.

OMG! I haven’t laughed this hard since Seduction and Snacks..while I wasn’t laughing I had a stupid smile on my face. This is the Tara Sivec I love to read. The laugh out loud, people look at you funny in public, swoony hilarity that makes her the queen of comedy.

Clint and Brooklyn will steal your heart with there witty come backs. Brooklyn’s dad had me snickering and totally relating. I loved watching the relationship evolve, I adored all the friends and small town life. Tara hit the nail on the head with her tiny town craptastic life you just can’t seem to leave.

A love hate love trip with tons of banter, tons of friendship and a little melting in your chair. I LOVE this book!

A few seconds later, the man I saw riding the horse out front walks into the room with his cowboy hat-covered head tipped down low so I can’t see his face, carrying Mia in his arms.

No, I still don’t like children, but come on! Seeing a hot, manly cowboy wearing tight jeans, with his cowboy boots thumping across the floor, and carrying a kid in his arms would make anyone weak. Too bad he’s Nicole’s husband. Damn. I should have paid better attention to her Facebook photos. Lucky, lucky girl.

And then he lifts his head and our eyes meet.

“You!” I shout, my eyes bugging out of my head.

“What the hell is she doing here?” he growls, setting Mia down on the ground.

My only source of happiness right now is that Mia presses her face to his jean clad leg and wipes her nose back and forth against the material, leaving a trail of snot behind.

Whatever. I know I’m not a superhero in a comic book, but this guy has been the bane of my existence since the day I met him when I was in kindergarten, he was in second grade, and he threw a rock at my head. I kicked him in his tiny nuggets first, since he told me I couldn’t play baseball with him and his friends because I was a girl, but that’s not the point. If this were a comic book and we were meeting in a dark alley, I’d be holding my fists above my head next to a talk bubble that says So, we meet again. Tonight I will get my revenge and you will die by my iron fists! WHAM! BAM! KAPOW!

I cannot believe I was checking out his ass when I got here. There’s got to be a bottle of bleach somewhere in this kitchen I can pour into my eyes.

“What am I doing here? What are you doing here? Aren’t you supposed to be off in Silicon Valley becoming the next Mark Zuckerberg?” I ask, making sure my eyes stay above his neck and aren’t tempted to head south and see if those tiny nuggets hugged in his tight jeans grew in size since the last time I threw my foot into them.

Which would have been his senior year of high school, right here in this very kitchen, at his graduation party when he asked me if I bought the dress I was wearing in the toddler section.

It was a LBD! It was supposed to be tight and tiny, goddammit!

And seriously, what is he doing here? Last I heard through the high school grapevine, after he graduated from UCLA, he became a hotshot software developer at some huge company in Los Angeles and hadn’t been back home in years. Not that I ever asked. Or cared. You know, just idle chitchat after one too many glasses of wine and a friend request on Facebook from someone we went to high school with.

“Awww, have you been keeping tabs on me all these years, fancy pants? I knew you always had a thing for me.” Clint smirks.

“You look like horse shit,” he fires back, that stupid grin never leaving his face.