Be prepared to laugh, swoon and melt! She’s sassy and he’s determined with one heck of an ego!

I adored this read! Serious laughage from the very first chapter!

Pick Six: A term used when a quarterback throws an interception and a defensive player returns it for a touchdown, resulting in six points.

Laughs from the very beginning! Shenanigans and Six is a little ball of witty sass you are going to love! Sean is a hot, ego driven, can rock a pair of football pants phenom and she’s going to flip his world up side down!

A real fun trip and glorious journey! If you don’t laugh you need your giggle box checked cause this is some hilarious stuff. 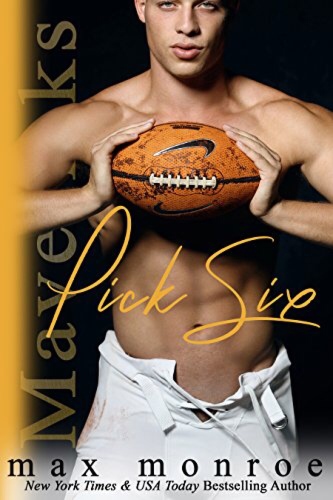 Important announcement from The MMO*: After careful evaluation of Pick Six, we can publicly state that Sean Phillips is certified Book Boyfriend Material.

He proved to be of the highest sexy, cocky, and hilarious quality. We, as an organization, are proud to give Sean Phillips our endorsement.

Sean Phillips is a sexy as sin enigma.
Cocky. Promiscuous.
The New York Mavericks star wide receiver.His quick moves and sure hands extend way past the lines of the football field—and into the bedroom. Sure of himself and sure of his life, Sean’s convinced he can handle anything. But when beautiful, pint-sized Six Malone delivers a challenge he’s never faced before, his certainty starts to waver.**Six Malone is a force to be reckoned with.
Feisty. Hilarious.
The popular YouCam vlogger Pick Six. The chance to work with the Mavericks on an eight-episode vlog series is the opportunity of a lifetime, and Six knows it.But after an interesting first encounter turns into a head-to-head battle with cocky football star Sean Phillips, her attention shifts—to keeping herself from falling in love. Too bad spending time with the team is part of the job, and Sean has a flawless track record…of getting what he wants.

*Disclaimer for the Disclaimer:

The MMO is a fictional organization created and operated by Max and Monroe. Everything The MMO states is fictionally true. The MMO is staunchly against fictional lies of any kind.