The Life & Death of Samuel Clearwater by T.M. Frazier

The bowtie is BACK!

5 STARS — The most thrilling ending ever! Positively AMAZING!

An amazing action packed punch to the heart. I will miss these characters so much! I have traveled through every suspenseful trip to death and back and now they feel like part of my family.

T.M. does not disappoint in wrapping this series up. This is an epic ending to a phenomenal series of books. It is suspensefully tragic right from the first words, picking up right where part two left us hanging off that cliff.

Preppy is complete darkness that you can’t help but love. He is the bad boy with the heart of a knight in shining armor with the twisted mess of a serial killer. You don’t mess with his family, he will get you in the end.

He rose from the ashes and he’s not afraid to go back to save those he loves.

I don’t usually stick with a series as long as this one but I am so glad I did because this cast of misfits is ingrained in my brain and will always hold a special place in my best reads of all time. 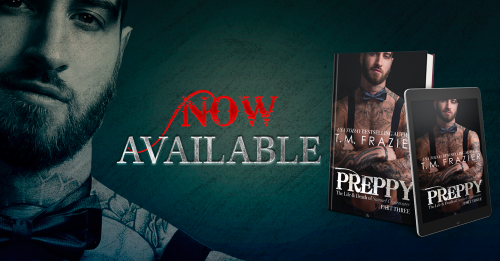 Kevin had occasionally done something that reminded me of myself, but next to a DNA test, I still had no valid proof he was my brother. Nothing that connected us as family.

“Dude, you’re creeping me out,” Kevin said, reaching for his shorts.

Before he could pull them back on I dropped the hose and bee-lined toward him, wrapping him in a bear hug. “You really are my brother.”

“Huh?” Kevin asked, standing as still as a statue.

“Shhhh…just let me love you.”

“What exactly is going on out here?” Dre asked from the porch, flipping on the light. I still didn’t let go.

“I have no idea what’s going on,” Kevin said, wiggling free from my grip.

“Oh yeah?” Dre asked, amusement in her sleepy tone. She yawned and cinched the sash of the sexy little robe she was wearing that showed off those amazing legs of hers. “How are you so sure?”

I stepped back and pointed down to Kevin’s massive cock. “Because of that!”

Dre’s sweet laughter filled the air. I picked up the hose again and started to spray Kevin down. “Shit man, that’s cold!” he shouted, dancing around in the grass. “And are you gonna fill me in on what exactly she’s laughing at?”

“That,” I informed him, spraying his crotch with water. “Because I just found more proof that we’re brothers than the fact that we think we both were shot out of the same cunt.” I grinned from ear to ear.

“Okay? And what’s that?” Kevin asked. I turned off the hose and Dre tossed him a towel.

I dropped my eyes to the huge slab of man meat between Kevin’s legs. “From the waist down we’re not just brothers, we’re fucking twinsies.”

“Uh, what the fuck, Preppy?” Kevin asked, putting his shorts back on.

“Quick,” I said. “Tell me something. How do you feel about pancakes?”

I shut my eyes tightly, clenching my fists at my side. I cracked my neck and slowly turned to face him. I opened my eyes. “What the fuck did you just say to me, boy? You better start running.”

“Wait, what?” Kevin asked, taking a step back and tripping over the sprinkler. He stood up and bolted through the gate. I chased him through the field while Dre looked on and laughed.

“I take it all back! You’re not my brother!” I shouted, tackling him to the ground and sitting on his chest.

“What the fuck, Preppy?” Kevin asked, squirming under me.

“You and I need to have a serious fucking talk.” I leaned down until my nose was almost touching his. “About the abomination that is waffles.” 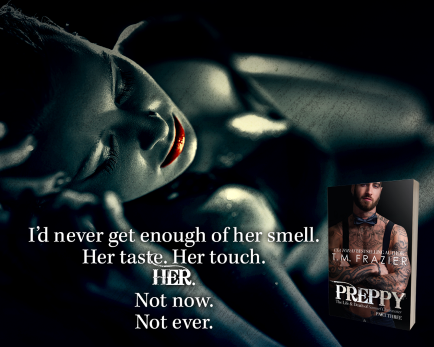 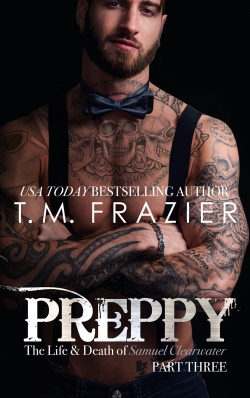 Dre was just a beautiful stranger when Preppy saved her the first time around. Now, he has to save her again, but she’s no longer some stranger, she’s family, and he has no idea who or what he’s up against.

What he does know is that putting his family back together is the only acceptable outcome.

He’s alive…and he’s out for BLOOD.

Preppy Part Three is the third book and conclusion of Preppy and Dre’s story. It’s also the 7th book in the King Series, which should be read in order starting with KING & TYRANT.

The entire Preppy Trilogy is so very great! The entire King series is one of the best out there!

Get caught up with Preppy with these:

If you haven’t fallen into this world yet, YOU need to get started! Find all the books HERE: http://amzn.to/2pFp5pi

T.M.Frazier is a USA TODAY bestselling author. She resides in sunny Southwest Florida with her husband and her young daughter.

When she’s not writing she loves talking to her readers, country music, reading and traveling. Her debut novel, The Dark Light of Day was published in September of 2013 and when she started writing it she intended for it to be a light beachy romance.

Well…it has a beach in it!

Her latest works include her USA TODAY BESTSELLING KING SERIES and All the Rage.

Connect with the Author:

Stay up to date with T.M. by signing up for her newsletter today: