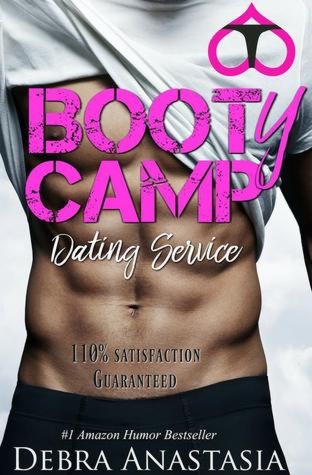 wrong when he matches people. It’s a gift passed down from his grandmother to his mother to him.

He’s sexy but stays behind the scenes, letting his buddy Chance do all the talking while he matches the clients at parties and events. Booty Camp Dating Service travels the country, and nine months after they leave the city there’s always a flurry of weddings and an accompanying baby boom. Booty Camp claims that clients will be 110% satisfied and they deliver on that promise every single time.

Except Wolf refuses to deliver on that guarantee for himself. He doesn’t find love until Hazel Lavender’s best friend pushes her through his front door. Now all he wants to do is make sure Hazel is 110% satisfied…in his bed. Which, ironically, would break the very rules Wolf demands of his employees–no dating clients, ever.

So instead, Wolf and Hazel fight. And kiss. And fight some more.

Will Wolf’s own rules make him the very first Booty Camp Happily Never After? (Book Camp Dating Service is a STAND ALONE!)

So much fun! Hazel and her middle fingers with her attitude will have you loving it! Wolf, holy moly! Wolf is so very hot

and if this is what you get from this dating service…sign me up! This is quirky with amazing characters and lots of angst.
Hazel has been burned, left at her most vulnerable by a complete douche. Friend Claire talks her into trying Booty Camp Dating Service…110% guarantee you will find your soul mate…Hazel is not impressed.
Wolf has a gift for matchmaking. He promises you will find your perfect match. Well what happens when the matchmaker meets his match. Fireworks…anger…angst…fun! -> “He got why men fought to protect a woman. He got why they would drive across country, why they would settle down.”
You will laugh, you will swoon, you will smile….Hazel is an amazing woman and Wolf will make you howl!

Wolf decided that he would watch Hazel get on the elevator since she was not making any attempt to come open the door for him. And then a couple came up behind him.

“There’s your ex! Holy crap, she looks wasted. How sad. Can you feel me up in front of her again? I love to watch her change colors. She goes all green.”

The man, who looked like a Ken doll come to life, pulled out a key card and tapped it on the device to open the door. 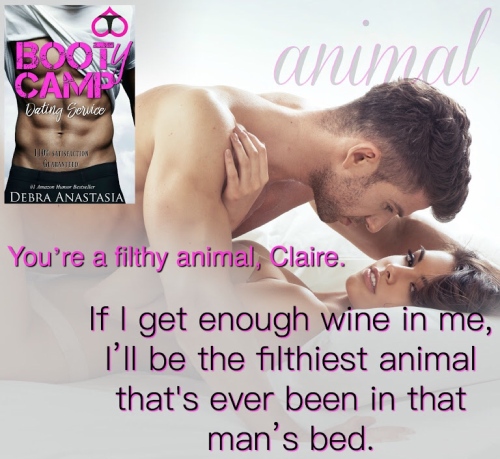 “Sure thing, baby. I love your mean streak.”

As they entered the building, Wolf watched as Hazel’s eyes found the loud couple.

They were fawning all over each other.

The defeat in Hazel’s posture made Wolf grab the door before it closed and locked him out.

Her eyes looked moist before she aimed her gaze toward the floor. The two idiots were play acting their parts to make her extra miserable.

Wolf planned on regretting later what he was going to do now. She might even have him arrested for it, but he pushed the Ken doll out of the way like he was dying of thirst and Hazel was a glass of water.

She was surprised when she looked up to see him stalking her. She looked over her shoulder, saw only the wall, and turned back to him.

Wolf snaked one arm around her waist and slid his other arm behind her neck. Her grabbed a fistful of her brown hair and used it to guide her mouth to his.

He kissed the living hell out of her.

At first she was tense and unmoving. But he refused to let it stop him. The elevator’s bell sounded as the doors opened.

When Ken doll and mean slut tried to step on to it, Wolf held out his arm out to block them.

He hefted Hazel, and she took the hint, hopping up and straddling him, koala style. He never stopped kissing her. Well, now she was kissing him while he used his arm to bar the others from the elevator.

Wolf turned and put Hazel against the wall. And he knew he was doing it for her, but everything she was doing in rebuttal was very welcome to his now rock-hard dick.

The doors closed behind them and the elevator started its assent before he forced himself to put her down.

She straightened his Booty Camp shirt and jacket on her body and covered her mouth with one hand. Then she slapped his chest with the other.

“What the hell was that?”

Line up readers, your Booty Camp date is waiting…

Debra writes stories mostly in her pajamas with her hairy coworkers (dogs and a cat) to keep her company. Comedy, New Adult, Paranormal and Angst stories fill up her hard drive. A lot of her time is spent in the mom carpool lane. Debra has been married for 19 years to her favorite guy. She loves to laugh at her own farts in the morning and can be found on Facebook and Twitter being an idiot. She’ll hug you if she ever meets you and will most likely smell like cotton candy when she does it.