“Infidelity – it isn’t what you think”

It all began in Del Mar, a chance meeting with a single rule–one week only. 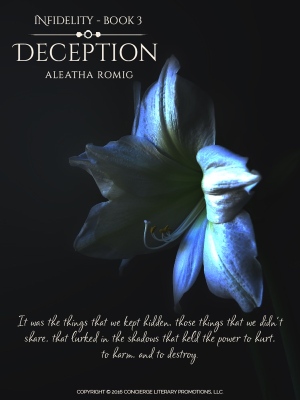 Lennox ‘Nox’ Demetri and Alexandria ‘Charli’ Collins had every intention of following it but rules are made to be broken. In CUNNING they are reunited with Nox setting down new rules for the game and Charli having no choice but to follow them.

Now, once again, the game has changed. Nox and Charli’s hot sensual encounter has grown into something more but it is threatened with secrets and regrets. Is it their love and intense sexual chemistry that’s pushing them together or something darker, a puppetmaster behind the scenes pulling the strings on their love affair?

Shadowy villains lurk around each corner and everyone is suspect as Nox’s and Charli’s pasts collide with the present and threaten to compel them back to their predestined fates.

Can deals brokered in the past be negated by something as pure as love and as steamy as the attraction shared by Nox and Charli? Or was it all a deception—starting with that very first meeting?

From New York Times and USA Today bestselling author Aleatha Romig comes a sexy, new dominant hero who knows what he wants and a strong-willed heroine who has plans of her own. With classic Aleatha Romig twists and turns, the depth of this epic romantic suspense continues to reach new levels as past and present intertwine. The Infidelity series will have readers swooning one minute and screaming the next.

DECEPTION is a full-length novel, over 300 pages, and the third of five books in the INFIDELITY series – It isn’t what you think!

5 STARS
Wicked, twisted, suspenseful, and STEAMY! Aleatha has done it again. I am so entranced in this series that I just don’t know where to begin. I am unable to predict where this will go or how we will get there. I LOVE IT.
Charli’s world is not getting any easier. There are several mysteries to solve. A trouble past to bring to the light. We see inside Nox’s head a little more and we get to know his dad Oren in this one plus get a glimpse at Charli’s Mom.
The step-dad needs to meet an untimely demise! I really despise this man. His son needs to be with him and find his way to hell also.
What could the future possibly hold for the characters? I am anxious to find out! Such a wild ride.

Gripping the phone, I nodded, though I knew he couldn’t see me.

“If I were there, I’d unwrap you, like a fucking Christmas present. Each piece of your clothing would find its way to the floor as I exposed your perfect, sexy-as-hell body. I’d run my fingers and tongue over every inch of that soft skin, tasting you and leaving goose bumps as a trail of my exploration.”

My eyes closed as his words touched me.

“Princess, I’d punish your ass for your insolence in pushing to go back to the city tomorrow and for scaring the shit out of me by not answering your phone. Then after I turned it fire-engine red, I’d make it feel better, showing you how much I admire your strength and determination.”

My neck strained as I sucked in a breath, lifting my behind from the mattress and imagined all he described.

“I’m not there,” Nox continued, “but I’m going to take what I can get. Do you have a problem with that?”

“N-no.” My voice sounded wonton, even to my own ears.

I hurriedly kicked back the covers, revealing my yoga pants and stocking-covered feet. “A big t-shirt, yoga pants, socks…”

I sucked my lower lip between my teeth, waiting for his next command.

“Tell me what I want you to be wearing.”

“Is the bedroom door locked?” he asked.

Without thinking, my feet, covered with fuzzy socks, landed on the soft rug that surrounded the big bed. My socks slid as I skated across the wood floor, no longer worried about ghosts or Demetri secrets.

My thoughts were now consumed with everything Nox.

I tested the knob. As I did, it clicked and the small button within the knob popped out. I pushed the button back in and verbally confirmed my mission. “The door’s locked.”

“Are the blinds shut?”

I turned toward the windows. Was it still raining? I couldn’t hear anything but the way Nox’svoice reverberated through the phone, sending shockwaves throughout my body, my blood coursing to keep up. “They’re shut.”

“Keep the lights on.”

My hand lingered over the switch. Would he know if I disobeyed?

With a sigh, I did as he said and moved my hand away from the switch. “They’re still on.”

“Now, put me on speaker phone. I want you to fix the attire problem we mentioned earlier.”

My lower lip disappeared as I hit the speaker button and laid my phone on the bed.

“Charli, you need to respond to me. I can only hear you.” 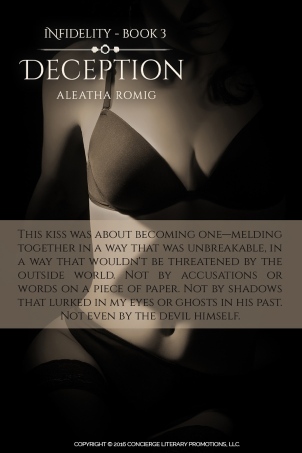 If you haven’t found your way into this series you must start NOW!! I highly recommend EACH ONE!

One week. No future. No past. No more.

Alexandria Collins has one week to live carefree—no ghosts of her past or pressures of her future haunting her. Reinventing herself as “Charli,” she is knocked off her feet by a sexy, mysterious man who brings her pleasure like she never imagined.  With her heart at stake, she forgets that decisions made in the dark of night reappear in the bright light of day.

“Some of my tastes are unique. They aren’t for everyone. I understand that.”

Lennox “Nox” Demetri is wealthy, confident, and decisive—he knows what he wants. From the first time he sees Charli at an exclusive resort, he knows he wants her. Although he is usually the one to make the rules, together they agree on one:

One week. No more.

When betrayal comes from those closest to Alexandria, she must decide how far she is willing to go to survive. Choices are not always easy, especially when they involve the heart, body, and soul. After all, Infidelity is a business, and some rules are meant to be broken.

“Is it really cheating if you’re doing it to yourself?”

From New York Times and USA Today bestselling author Aleatha Romig comes a sexy,new dominant hero who knows what he wants, and a strong-willed heroine who has plans of her own. With classic Aleatha Romig twists, turns, deceptions, and devotions, this new epic dark romance will have readers swooning one minute and screaming the next. Have you been Aleatha’d?

BETRAYAL is a full–length novel and the first of five in the INFIDELITY series.

“He owns you. Whatever he tells you to do you do“.

One year. No future. A past that won’t go away.

Lennox “Nox” Demetri broke his own rule by making a deal. It may not have been directly with the devil, but that doesn’t mean Satan himself isn’t watching. Was it fate that brought Charli into his life and his bed? What will happen when rules are broken and secrets are revealed?

Alex “Charli” Collins found pleasure with Nox like she’d never known. That was before she knew his last name. Now that Infidelity is involved and the rules have changed, what will result when real life and fantasy collide?

Is it really cheating if you’re doing it to yourself?

From New York Times and USA Today bestselling author Aleatha Romig comes a sexy, new dominant hero who knows what he wants and a strong-willed heroine who has plans of her own. With classic Aleatha Romig twists, turns, deceptions, and devotions, the depth of this new, epic dark romance reaches new levels and will have readers swooning one minute and screaming the next.

CUNNING is a full-length novel, 360 pages, and the second of five books in the INFIDELITY series.

Infidelity – it isn’t what you think.

Aleatha Romig is a New York Times and USA Today bestselling author who lives in Indiana. She grew up in Mishawaka, graduated from Indiana University, and is currently living south of Indianapolis. Aleatha has raised three children with her high school sweetheart and husband of nearly thirty years. Before she became a full-time author, she worked days as a dental hygienist and spent her nights writing. Now, when she’s not imagining mind-blowing twists and turns, she likes to spend her time a with her family and friends. Her other pastimes include reading and creating heroes/anti-heroes who haunt your dreams!

Aleatha released her first novel, CONSEQUENCES, in August of 2011. CONSEQUENCES became a bestselling series with five novels and two companions released from 2011 through 2015. The compelling and epic story of Anthony and Claire Rawlings has graced more than half a million e-readers. Aleathareleased the first of her series TALES FROM THE DARK SIDE, INSIDIOUS, in the fall of 2014. These stand alonethrillers continue Aleatha’s twisted style with an increase in heat.

In the fall of 2015, Aleatha moved head first into the world of dark romance with the release of BETRAYAL, the first of her five novel INFIDELITY series. She also began her traditional publishing career with Thomas and Mercer. Her books INTO THE LIGHT and AWAY FROM THE DARK will be published through this mystery/thriller publisher in 2016.

Aleatha is a “Published Author’s Network” member of the Romance Writers of America and represented by Danielle Egan-Miller of Browne & Miller Literary Associates.